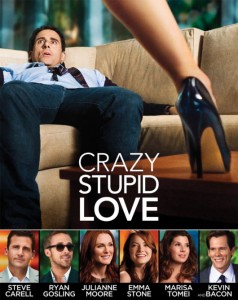 I got a chance to see an early screening of Crazy, Stupid, Love. I’d been looking forward to it, as the primary actors are all ones I enjoy a great deal. If you haven’t seen Emma Stone in Easy A, you must. Easily the best teen movie in over a decade.

Crazy, Stupid, Love starts with happily married Cal being dropped a bomb by his wife, Emily: she’s had an affair and wants a divorce. The film traces his response to her mid-life crisis – a crisis of his own, aided and abetted by Jacob, the quintessential lady-killer who helps Cal find his groove (and some style.)

Like many modern films and television shows, CSL is a “dramedy.” When the genre is at its best, like in CSL, it really works, reaching the audience on many levels. The whole theatre laughed uproariously at the goofy parts and seemed moved by the story, which was insightful and sweet. Using Steve Carrell, Julianne Moore, Ryan Gosling and Emma Stone made a big difference to the dramatic parts of the story. Because they aren’t known for being in tons of puffy rom-coms, they came off as sincere and likable (except for maybe Moore, but I think that was a conscious choice on her part.) The plot devices seemed less formulaic in their capable hands.

Yes, I said formulaic, but I still found it well-written, sometimes the clique is the right choice. I appreciated the cultural references which were mainstream and fun. More daring was the soundtrack, but it fit the film well. The cinematography also aided the storytelling of the film, there was a good amount of grain and handheld shooting that gave it a more organic quality.

I wouldn’t say this is a “must see in the theatre opening weekend!” kind of film, but I don’t see many movies in the theatre these days (tickets + babysitter = not worth it.) I think most people will enjoy it, though, whenever you have the chance to see it. (Rated PG-13)