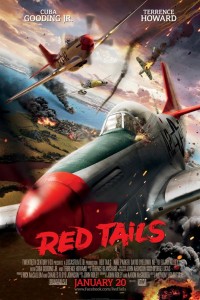 It may seem a little strange for George Lucas to self-finance an action movie about the Tuskegee Airmen. But it’s a true story with all the hallmarks of an epic tale: downtrodden heroes, lots of adversity, an enemy we love to hate. Red Tails makes for compelling film material.

For an epic tale, it is in many ways narrow in scope. There is little backstory. We begin in Italy, where black airmen are already flying missions. There is little to no information about their backgrounds and training, though it is obvious they are well-educated. There is some story on the ground, enough to keep the film moving and interesting. But it’s also cliched and a little cheesy in moments, in the ways you’d probably expect. And that’s okay.

Take one part Star Wars and one part Top Gun and you’ve got the feel for the battles in-flight. I am not a big action fan, but I enjoyed them.

Red Tails is not going to win many awards. But it’s the kind of movie that needs to keep being made. In a nation full of reality television vapidity, Red Tails is a movie that exposes people to true American heroes who embodied excellence and were willing to sacrifice everything for a country all too ready to count them out. The Tuskegee Airmen were men of courage and of faith. This film honors their memory and is the sort of story that inspires and will continue to do so for many years as children watch it for the first time and are inspired to learn more about their history.

Lucas has mentioned that as he contemplated the project for over two decades, he eventually envisioned the story as a trilogy (surprise, surprise!) However strange it sounds, I would love to see a prequel made that explains the background and training of the men before they reach Europe. A sequel that shows what happens when they return home would also make a worthwhile film. Though Red Tails does stand alone, it feels incomplete, there is just so much story left to be told.

I’d commend Red Tails to you and I think it is more family friendly than the rating (PG-13) implies. The language is pretty clean and the romance is not nearly as racy as 90% of PG-13 movies. (I am happy to describe it for you if you are curious / worried.) The rating is for the violence of war, which is less gruesome in the air than other combat movies. Red Tails opens tomorrow in theaters nationwide.