Yard of the Month 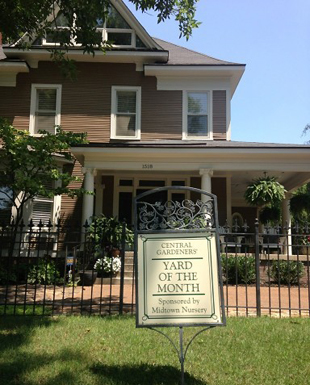 When we moved in two years ago, the house across the street was for sale. It had been on the market for a while, and even though it obviously needed updating, it had good bones and wasn’t so bad it was uninhabitable. Every week people came to look, but no one took the plunge.

One morning I noticed an under contract sign on the house, and a few weeks later, it had sold. Then, the joy began. The couple who bought the house began to fix things up. The peeling, dull yellow paint was replaced by a warm light brown. The scraggly bushes everywhere were ripped out and replaced by green grass. Two comfortable chairs with cute pillows appeared on the wrap-around porch, then more flowers and more greenery.

When I walk down the stairs and out the front door, that house is the first thing I see. Watching it being restored little-by-little, week-by-week has been a source of encouragement. So when we returned from vacation and I noticed the sign in the yard, I was so excited for my neighbors. It is one thing to pour your heart into making something what it was meant to be, it is another for the whole neighborhood to recognize it.

I wish every act of redemption came with an physical award, a greater and better prize that will not migrate to a new winner at the end of the month. But for now, I will smile at this small acknowledgement of the good and beautiful when I walk out my front door.

This entry was posted in home sweet home. Bookmark the permalink.

One response to “Yard of the Month”