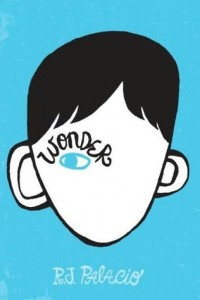 “I know I’m not an ordinary ten-year-old kid. I mean, sure, I do ordinary things. I eat ice cream. I ride my bike. I play ball. I have an XBox. Stuff like that makes me ordinary. I guess. And I feel ordinary. Inside. But I know ordinary kids don’t make other ordinary kids run away screaming in playgrounds… I won’t describe what I look like. Whatever you’re thinking, it’s probably worse.”

From the first page of R.J. Palacio’s debut novel, Wonder, readers are rooting for Auggie Pullman, who due to the 27 surgeries needed to help correct his craniofacial abnormalities, has been homeschooled all his life. But now, he’ll enter the middle school at Beecher Prep, like a lamb headed for slaughter.

Auggie is keenly aware of how people react to his face, from averting their eyes to staring to talking behind their hands about him. Auggie, his parents and his sister had created some level of comfort on their block and in their normal routine, and even through things like a toy astronaut’s helmet he wore everywhere when he was a few years younger. But now it is time to face the world, and readers come along for the journey.

Although Auggie is a character that induces a great deal of sympathy, there is a depth and realness to his character. He loves Star Wars, he tells good jokes, and he loves his dog, not unlike most of the young boys I know. Because he is more than his exterior, this book is able to transcend the “after school special” land that a book about a child with a birth defect often remains in.

Palacio’s choice to tell the story through sections with different narrators is what propels it into award-winning territory. Hearing from Auggie’s point of view is very important, but hearing from his sister Via, and some of the children at school adds another dimension to Wonder that works to its advantage. And it’s rare that so many points of view are given and done well in a book for young readers.

One line that is repeated by the teenager characters in the book is “the universe was not kind to Auggie Pullman.” And though this is true, and painfully real to readers, Wonder is not bogged down in Auggie’s suffering. It’s a book with a great deal of heart and joy, and a message that will resonate with both children and adults without seeming forced or contrived. The universe may not always be kind, but we are all able to be. I am thankful for the reminder. (10/10)

I received a free copy of this book for review purposes. The opinion expressed is my own.

This entry was posted in books, reviews. Bookmark the permalink.

2 responses to “Wonder by R.J. Palacio”