Truth, Complexity, and Other Things to Ponder 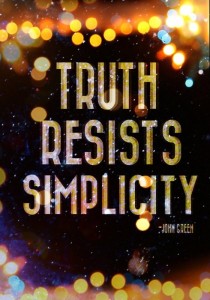 On their popular youtube channel, Hank and John Green often note that the truth resists simplicity. When you are thinking about economics or politics or international issues, it’s a good thing to keep in mind. The world is a complex place. People are complicated, and the more people involved, the more complicated it can get.

The 24-7 news cycle seems to perpetuate over-simplification. More news doesn’t equal better news, in fact, in the race to get some analysis on the air, journalists often lose necessary nuance and perpetuate stereotypes and misinformation. The decline of print media means we have less informed people taking the time to understand situations before they report them, and that’s a loss we all feel.

Complex problems require complex solutions. For example, the problems in Central Africa are much larger than Joseph Kony* and making his capture the #1 priority for the region in Western minds probably doesn’t reflect what most Ugandans feel would make the biggest impact. For example, there is a great deal of development needed in Northern Uganda and also a health crisis called nodding disease, that has affected thousands of Acholi children in the past few years. I was very moved reading about women in Kampala tying themselves to trees yesterday in protest of the government’s failure to devote enough resources to this devastating disease.

But this problem of not engaging the world complexly isn’t new. We’ve always struggled with it. We find heroes standing for truth, beauty and goodness, and are heartbroken to learn they are narcissists or adulterers. We think of wars in terms of good guys and bad guys. We simplify even knowing that we ourselves are not simple, and our motives and actions are rarely pure.

That’s probably because the truest story we have is very simple. It’s a story where the good is immeasurably, purely good and the hero has no skeletons in his closet. It’s the story we want all our other stories to be like. And so we try to fit all the other stories into a simple narrative of good vs. evil, where evil will be vanquished and everyone will live happily ever after. In a fallen world where the characters are made in the image of God, our reductionistic efforts will fail. But if we look at these human stories as part of the big story of cosmic history, we can know that good will triumph over evil, and there will be no more suffering or sorrow or pain.

That doesn’t mean we can’t, or shouldn’t work for justice. I believe it is good and right for us to do so. But we can’t expect our human efforts to have heavenly results. There is no magic bullet, except for the coming of Jesus. It’s freeing to know that we can’t fix everything, so we can focus on doing the best we can, where we can, in ways that bring shalom.

*If you are interested in #Kony2012 in particular, I would recommend the following links:
This round-up of 10 African reactions to the Kony 2012 campaign
Kony 2012 — Why the Backlash Matters
Joseph Kony is not in Uganda (and other complicated things) from Foreign Policy magazine’s blog.

This entry was posted in general, in the news. Bookmark the permalink.

4 responses to “Truth, Complexity, and Other Things to Ponder”