Kari often posts on Fridays about something that is saving her life that week. What she means by that is some way that God has been present and visible to her. She borrowed the idea from a book I’ve been meaning to read

. I am joining in, with occasional posts in this category.

VBS has been saving my life this week. I had planned for the girls to attend one VBS this summer at a sister church 15 minutes away: we don’t have VBS, their friends were going and I knew this particular church would do a great job of communicating truth while having a great time. Then I received my first deadline for a big writing project and it became critical. It was so nice to have dedicated time to write and even meet to edit my finished work thus far, all during VBS. No midnight oil was burned for the first deadline, my stress level was much lower than anticipated, and VBS was certainly a huge factor in making it all happen. 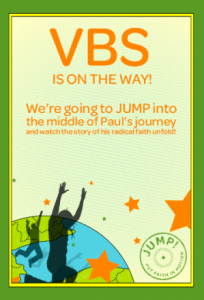 Yesterday as we picked up the kids from their last session, one of the moms from Lexi’s class begged me to sign her up for another VBS next week so her daughter would have a buddy. Two of Kate’s besties from school are also going. I have another deadline in less than two weeks. It’s directly across the street from my favorite Panera to work at with lots of outlets next to booths. Michael’s 6 week long summer school class starts Monday and he’s really busy (as usual, he has never taken a real summer break, teacher style.) So I caved and signed them up.

Thanks to all who volunteer for VBS and allow slackers moms like me to take advantage without judgement. I am very grateful. Kate and Lexi would add their appreciation for every teen VBS volunteer who has ever given them a piggy back ride. (How did that become a VBS thing? I’ve noticed it in Birmingham as well.) I am also thankful to those who write great VBS curriculum that is fun, engaging and teaches the truth.

To all who welcome kids from other churches to VBS, you are saving my life this week. And you are probably saving someone else’s as well.

This entry was posted in saving my life. Bookmark the permalink.

3 responses to “Saving My Life: VBS”